skip to main | skip to sidebar

A portrait of Betty Crocker first appeared in 1936. It subtly changed over the years, but always accommodated General Mills' cultural perception of the American homemaker: knowledgeable and caring. The current image of Betty Crocker, according to the corporation, is actually a combination of 75 real-life women of diverse backgrounds and ages. These portraits were always painted, with no real person ever having posed as a model, and they never showed the character from the shoulders down. 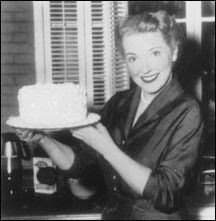